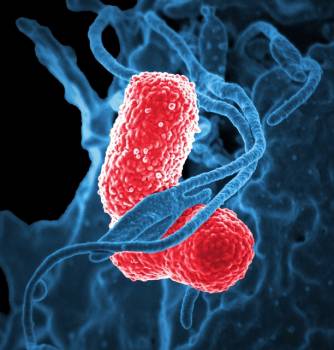 Gastroenteritis is a term used to refer to a self-limiting infection of the gastrointestinal tract, characterized by abdominal cramps, diarrhoea, nausea and vomiting, and oftentimes fever. If the infection is food borne, it is referred to as "food poisoning".  The terms "stomach flu" or "gastric flu" are sometimes used when referring to gastroenteritis due to a viral infection.

Gastroenteritis may also be due to parasite infections, and this generally occurs in those with lowered immunity, although  the parasite Giardia lamblia can cause gastrointestinal tract infections in healthy individuals.

Viral outbreaks can quickly spread through close contact, especially when hygiene practices and hand washing techniques are not very stringent.

• Rotavirus - responsible for the majority of gastroenteritis in children below the age of 2 years.
• Norwalk virus
• Other viruses

What are the Symptoms?

Gastroenteritis commonly presents with diarrhoea, often with abdominal colic and nausea or vomiting.  A fever may also be present.  Stools may be watery or semi-solid, and passed with increased frequency.

Dehydration can sometimes develop if there is inability to retain fluids (due to nausea or vomiting), associated with persistent diarrhoea.  Dehydration can occur fairly quickly especially in very young, which is why young children who develop severe gastroenteritis, commonly require intravenous hydration therapy in a hospital setting.

Doctors generally make the diagnosis of gastroenteritis based on a careful review of symptoms and a thorough physical examination.  This is done with the objective of ruling out other causes of diarrhoea (such as lactose intolerance, side effect from medication etc), and to differentiate viral gastroenteritis from that caused by other pathogens (which may require treatment with antibiotics).

Conditions such as appendicitis, mesenteric adenitis, hepatitis, spurious diarrhoea from constipation, gallbladder inflammation and bowel obstruction will also need to be considered and ruled out.

Careful evaluation of hydration status is done to determine if there is a need for more aggressive forms of hydration therapy, such as intravenous fluid therapy.

Investigations are usually not required since the majority of cases of gastroenteritis is mild and self-limiting.  However, tests may need to be done under the following situations:

Investigation that may be performed include:

As the majority of cases of gastroenteritis is self-limiting, the mainstay of home treatment is really to ensure sufficient fluid intake.  Specially formulated oral rehydration solutions (which contain the appropriate proportions of glucose and electrolytes) are commercially available for use, as the inflammed intestinal tract does not absorb plain water very well.  Besides, the body's electrolytes, which may be lost in large quantities due to vomiting and diarrhoea, may be further diluted, if plain water is used to replace loss fluids.

In underdeveloped regions without commercially available paediatric rehydration solutions, the World Health Organization (WHO) has established a recipe for fluid rehydration:

After 24 hours of fluid without vomiting, soft bland diet may be started slowly.

Your doctor may prescribe medication to manage your symptoms.  In general, antibiotics are not needed for the majority of gastroenteritis (which tends to be due to viral infections).  Some medication commonly prescribed include:

Anti-emetics (anti-vomiting medication): (to be used with care in young children) include metoclopramide, prochlorperazine and dimenhydrinate

Anti-diarrhoea agents: diphenoxylate and loperamide may be used (once again to be used with care in young children).  They help reduce diarrhoeal volume by decreasing gut movement and increasing absorption.

Antibiotics: antibiotics are rarely required as most are due to viral infections.  Under certain circumstances, such as when there is documented infection by bacteria or protozoa, antibiotics will be required.

How can Gastroenteritis be Prevented?

As with most infections, the key is to prevent the spread of the organism.  This can be achieved by:

• Avoiding going to school or work until symptoms have resolved

• Vaccinations for salmonella typhi and rotavirus