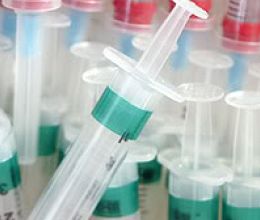 The BCG Vaccine is one of the first vaccines given to your baby at birth. It protects against tuberculosis (TB), a bacterial infection of the lungs, which is actively present in many Asian populations. In its more serious form, it can infect the brain and bone or may be disseminated throughout the body (miliary TB).

Common Side Effects:
Pain and swelling over injection site. Scarring.

The Hepatitis B Vaccine protects against Hepatitis B. Hepatitis B is caused by the Hepatitis B virus and it causes infection with associated inflammation (hepatitis) of the liver. Hepatitis B is endemic in Asia and it is transmitted via exposure to infected blood or body fluids. Common forms of transmission include unprotected sexual contact, blood transfusions and vertical transmission from mother to child during childbirth.

Dose:
3 doses over a course of 6 months.

Diphtheria is a potentially life-threatening bacterial infection of the respiratory tract. It usually affects the thoat and nose, but can occasionally cause constriction of the airways leading to breathing problems.

Pertussis is also known is “whopping cough”, so named because of the inspiratory gasp (“whoop”) after a coughing bout. It is caused by the bacteria Bordetella Pertussis, and infections typically start with cold-like symptoms quickly progressing to severe coughing. Severe cases may progress to respiratory arrest.

Tetanus (“locked jaw”) is a disease that affects the nervous system caused by Clostridium tetani, a bacteria commonly found in soil. In this condition, there is muscle spasms of the jaw, neck and other parts of the body.

Nowadays, it is often given together with the Polio vaccine in the Infarix 4-in-1, 5-in-1 or 6-in1 vaccines.

Common Side Effects:
Low grade fever, irritability, loss of appetite and swelling over the injection site.

Poliomyelitis is caused by infection by the Polio virus. In most people, this virus produces a mild illness which lasts for up to 3 days. However, in some, it progresses to the paralytic form.

Dose:
There are 2 types of polio vaccines (i) the oral polio vaccine (OPV) which contains active viruses, and (ii) the inactivated polio vaccine (IPV) given as an injection. The IPV is nowadays part of the Infarix 4-in-1, 5-in-1 and 6-in-1 vaccines. The Polio vaccine requires 3 primary doses followed by 3 booster doses.

The MMR Vaccine protects against Measles, Mumps and Rubella.

Measles is a very contagious viral illness characterized by fever, flu-like symptoms together with a rash.

Mumps is a viral illness which typically causes painful swelling of the parotid salivary gland. Occasionally, complications may arise causing meningitis and infection of the testes.

Rubella, otherwise known as German measles, usually causes a mild viral illness with rash in children, but can cause severe malformations in the fetus if caught during pregnancy.

Pneumococcal vaccination was included into the National Childhood Immunization Programme by the Ministry of Health in 2009. Pneumococcal disease is a group of illnesses caused by the bacterium Streptococcus pneumoniae, also known as pneumococcus. Pneumococcal infections can result in: pneumonia, meningitis, otitis media, sinusitis and bacteraemia.

In Singapore, 18 per 100,000 children less than 5 years old are infected with pneumococcal disease each year. In serious cases, 1 in 4 suffer complications (brain damage, permanent hearing loss, paralysis, mental retardation) and 1 in 16 die.